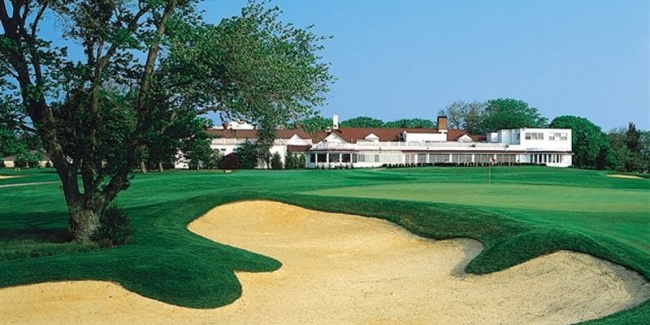 Atlantic City offers a taste of the British Isles at many of its own famed golfing venues.

A letter from a famous Brit hangs framed on the wall in the Mays Landing Golf and Country Club clubhouse in Mays Landing, N.J. It is a letter to Jim Fraser, whose family once owned Atlantic City's grand old course at Atlantic City Country Club (one of the nation's top-10 oldest golf clubs) and still owns and operates Mays Landing.

It reads, "Dear Jim. It's hard to believe that Atlantic City Country Club is older than I am...and I started playing there when I was in vaudeville."

Known almost as much for his golfing antics as his humor during his heydays, the famed comedian and actor was one of the great ambassadors of the game. Hope was also a native of England - with both history and ancestry in his corner - so he knew a great historical experience when he saw it.

He clearly saw one along the sandy shores of New Jersey at Atlantic City Country Club.

Hope went on to write in his letter to Fraser: "I am proud to be a part of the history of such a great golf club. What wonderful memories I have of playing the greatest game on earth with some of the greatest golfers ever. And, making a hole-in-one in front of reliable witnesses at the club isn't a bad memory either."
"Congratulations to the Atlantic City Country Club and its membership for an historic and colorful 100 years."

Haggis is a Scottish specialty that is considered a delicacy across the pond. Despite its somewhat dubious reputation by visitors from America, the minced parts of sheep dish is as well known in the British Isles as ... well ... the Open Championship (or "British Open" as we Yanks call it). This week the world will no doubt be once again reacquainted with the wonders of Britain - haggis among them. It will also be tuned into the most recent edition of the Open.

The upcoming championship is being held in east-central Scotland at Muirfield, considered the truest test of golf in the current nine-course Open Rota (or rotation). While the world's best golfers converge on this somewhat unusual links golf course overlooking the Firth of Forth, back at home along the course of New Jersey summer vacationers will be doing the same on an unusual variety of courses that have links to the links of their own.

European influence has always been a part of the fabric that makes up the golf landscape along the coast of the Atlantic Ocean in Southern New Jersey. Nowhere is that more prevalent than at venues like Atlantic City Country Club, where original designer John Reid, a professional golfer, routed the first nine holes in much the same manner that links courses were built back in Scotland. He did so by taking advantage of its natural setting along coastal waters and salt marshes and letting nature take its course.

Now some 116 years and multiple restorations later, the venerable Atlantic City Country Club has evolved into one of the great-granddaddies of clubs in the nation. Anyone interested in the game's history should waste no time teeing it up on the 6,577-yard classic (most recently restored by renowned designer Tom Doak shortly after its 100th birthday) in the near future. The club's rich background alone makes it one of the great destination courses in the East, though its current 18-hole layout and spectacular setting along Lakes Bay (named for Simon Lake, the inventor of the modern submarine) overlooking the Atlantic City skyline are both on par to its history.

The Boat Departs from Brigantine

/
A second course with ties to the Isles is the Links at Brigantine Beach. It was there that some of the earliest competitors from the United States heading for the British Open tuned up their games before crossing the pond. Legends like Walter Hagen and Harry Vardon at Brigantine are still honored at the timeless facility, which was at one time considered the only true seaside links course in America before vacation real estate began to surround it.

One of the most fascinating changes of pace in New Jersey is leaving the high-rise casinos of downtown Atlantic City and heading north along the coast to the closest golf facility to the city. There you will find The Links at Brigantine Beach, a 1927 Stiles & Van Kleek design where you can still go to practice before boarding a plane to play in the British Isles. Constant breezes and a wonderful routing are what make the course so inviting.

Donald Ross, who went from a modest greenkeeper at his local golf course back home in Dornoch, Scotland, to the most prolific producer of courses in the world during his time, did indeed earn his legendary status through his tireless pursuits. This turn-of-the-century (no, not the latest one, the one before) golf course designer even made his way to the Jersey Shore. The result? The Bay Course at Stockton Seaview Hotel and Golf Club, Atlantic City's home to the ShopRite LPGA Classic.

The resort's original golf course actually had two Scotsmen frame its wonderful challenge. The Bay Course, which plays along Reed's Bay in Galloway and situated just eight miles from Atlantic City (providing great views of its skyline), was initially routed by fellow Scottish immigrant Hugh Wilson (of Merion Golf Club fame) and opened in 1915. A year later, Ross completed the course by adding the sand bunkers and pulling together several strategic elements. Together (actually apart), these two esteemed Scottish-born artists created a jewel on the coast known to all who have stayed at New Jersey's quintessential seaside resort.

Then, of course, there's Twisted Dune - possibly the most visually striking golf course in the Atlantic City golf arsenal. With its inland links representation, if you were sent blindfolded to any course in the state, this is the one that you'd recognize by its name most readily. That's because every hole is so dramatic, you have nowhere to turn but in circles. One local pro described it as the spot where "Phoenix meets Scotland."

Twisted Dunes is a links style course with twisting landscapes, dramatic elevations, and contoured fairways. It is a challenging, yet supremely playable, 18-hole design.

Designer Archie Struthers moved two million cubic yards of earth to bring this remarkable course to fruition; creating a true taste of the Scottish Coast, right along the Jersey Shore.

Another course with a distinctly Scottish influence is Greate Bay, a primarily private club just south of Atlantic City. Known for famed designer and one of the game's great original pioneers Willie Park Jr. (a native of Scotland who was recently inducted into the World Golf Hall of Fame), Greate Bay is known for its private pace of play and its fun atmosphere.

The layout's traditionally small greens are considered among the best in Southern New Jersey. Though Park's "Touch of Scotland" has diminished over time due to the growth of trees (making it more parkland in style), the course still attracts celebs like LPGA golf legend Annika Sorenstam, a friend of the ownership. Other former guests range from Frank Sinatra to Dean Martin to Michael Jordan.

Built on a former landfill (Pineland's Park), McCullough's Emerald Golf Links is a true test of links golf as it replicates several holes from the British Isles. With no trees to speak of, the course is characterized by shifting winds, high grasses, rolling fairways and great conditioning. The winds truly dictate everything. Blinds shots and elevation changes also make this "grunge to green" layout an exciting adventure.


The only course in the area with 100-foot elevation changes, its No. 7 hole was ranked among the top 18 most fun holes you can play in America by Golf Digest architecture editor Ron Whitten.

According to general manager Tom Sullivan, "The course is so mysterious and captivating the first time you play it, you almost want to go out with a guide. It is truly the type of golf course you need to play more than once. We encourage players to come back."

One for the Run

Rounding out the list is the aptly named Scotland Run. Built in and around an old sand quarry, Scotland Run offers a distinctive blend of wooded, quarry, and links-style holes. The most unique characteristics include expansive waste areas and an imposing display of cliffs. Located 20 minutes from downtown Philadelphia and 45 minutes from Atlantic City, Scotland Run is named after a stream that defines the northern boundary of the massive 500-acre property, Scotland Run was named such due to its resemblance to the early settlers native homeland. They called the stream "Scotland Run Branch."

Scotland Run is a great choice for golfers coming to or departing Atlantic City on a golf getaway.

Learn more about all 20 Atlantic City courses and book your fall golf getaway at www.PlayACGolf.com.

Pat McCabe, a former University of Wisconsin - Milwaukee basketball shooting guard, can pop a three pointer from beyond the arc and sink birdie putts from the fringe.